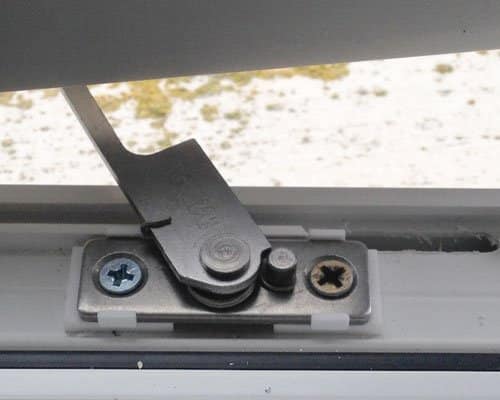 A window restrictor is a great solution for child proofing windows. The spring loaded type of restrictor will automatically catch every time the window is opened. It stops the window from opening more than a few inches, which prevents children from accidentally opening the window too far and falling out. It allows the window to be opened for ventilation purposes but without the worry out of an opened window.

As an additional benefit, this restrictor will also prevent accidental damage caused by the wind. It is very common for windows to be left open and to get damaged as a result of strong winds or stormy weather.

This window restrictor can be released to allow the window to be opened fully. This complies with the building regulations that state:

“Restrictors should operate so that they limit the initial movement of an opening section to not more than 100 mm. Lockable handles or restrictors, which can only be released by removable keys or other tools, should not be fitted to window opening sections.”

In addition to this, since July 1st 2017, all rented houses must comply to the following:

“Where a window has an opening section through which a person may fall, and the bottom of the opening section is more than 1400mm above external ground level, suitable safety restrictors shall be fitted. Safety restrictors shall restrain the window sufficiently to prevent such falls.”
S.I. No. 17 of 2017 HOUSING (STANDARDS FOR RENTED HOUSES) REGULATIONS